OK, Oklahoma City seems quite small and actually going through a bit of an over haul. There are some amazing views in the city’s botanical garden. So many water features. I needed a lot of water as I have never been so filthy as I was when I got in today!

For the first time I woke up to Helen turning off my alarm. Seems the late night played with my body clock a bit. What baffled me even more was the fact that it was still dark when I got up. I m

ean it felt like 3AM. The moon was full and at about 50 degree’s. It was bizarre. Anyway I continued with my morning routine but this time Helen and I thought I could do with some extra calories before I began so I had a 500 calorie protien shake. A delicious chocolate drink first thing. I headed off with Shaun & Chris leaving shortly after to come and catch up with me. They never found me, I would say it is because i am super speedy but actually it was because I turned off the road we were on. Aside from being spooked by the dark it was a pretty easy morning.

Wow, the wind today was strong. It was up to around 30 mph gusts and at some points when I was walking west I was actually having to lean into the wind to counter balance the force. At one point was was actually blown into the road. Pretty scary but i think this was just one moment where I lost concentration. Later in the day, it was so dusty that you could taste the dirt in your mouth, and my legs were black with the dirty getting glued to my leg with all the suncream I am wearing.

No, unfortunately I didn’t meet Don Corleone and he didn’t give me an offer I couldn’t refuse. However my Italian cousin, Lisa Deghe, is due to get married on her family farm near Lucca in Tuscany, Italy. The whole of my family have converged there and are having huge Italain feasts together. Consani, the farm house, is where I spent most of my childhood summers out there, mowing the lawns, breaking the mowers, eating fantastic foods and is actually the first time I drank wine and maybe a little too much of it. Anyway, I spoke to a lot of the family today and it is difficult to not feel sad that I am not there for my cousin. I will blog about how it all went, but for now, as they all sleep I have fingers and toes crossed for good weather in Tuscany tomorrow. Next time I speak to my cousin she will be married! I hope both Lisa & Emilio have a fantastic day!

This last picture mad me think that the cow had been done up like a member of KISS! 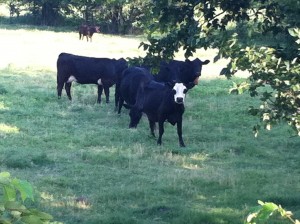 Jon Beeby currently resides in St. Louis, Missouri and is owner of ByJack.

A Step Too Far?